FoodExpo 2017: some perspectives on the ways to replace antibiotics as growth promotors in livestock farming 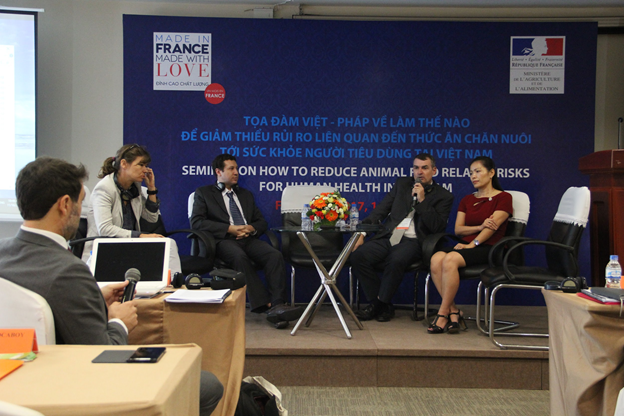 As part of the Vietnamese FoodExpo 2017 Seminar on how to reduce animal feed related risks for human health in Vietnam (on November 16th), Thierry Rocaboy, Managing Director at TECHNA NUTRITION VIETNAM, made a meaningful intervention on alternative ways to antibiotics used as growth promoters (AGP) in livestock. M. Rocaboy relied heavily on the reference to a 2016 Vietnamese law aiming to completely ban antibiotics in farms by 2020. He went over the successful results of a trial which was run by TECHNA in Vietnam based on a holistic approach in all aspects of the production system.

During FoodExpo 2017, where France was the Guest Country, TECHNA NUTRITION VIETNAM was invited by the French Embassy and the Vietnamese Ministry of Agriculture and Rural Development (MARD) to share its experiences regarding the ban of antibiotics used as growth promoters (AGP).

Nowadays, social expectations on food safety in Vietnam are high. Animal feed is a key element within the global value chain from farm to fork. Antimicrobial resistance is a big concern in this food safety issue, not only in the whole world, but also in Vietnam.

To fight antibioresistance, a big step was taken by the Vietnamese Government to gradually stop all use of antibiotics towards 2020. This increasing awareness led to a circular from the MARD (31th May 2016, n˚6/2016/TT-BNNTNT) in order to limit antibiotics with growth promotion effect to 15.

By so doing, the MARD is following a global trend. European Countries, after an eight-year transition period, stopped the use of growth promoters (AGP) in 2006. A ban on all kinds of antibiotics in livestock farming will be imposed after 2020, and those currently in use in animal feed are allowed until the end of 2017.

AGP are often linked to performance increase. Therefore AGP ban is a big concern for all the livestock professionals (feed millers and farmers) for whom productivity and performance are the key to a sustainable domestic sector.

The European example: a successful case study on the alternative ways to AGP in livestock

The presentation and the round table was a good opportunity to share past experiences in the European context to support the TECHNA Group’s perspective — and expertise!— regarding AGP ban for almost 20 years. Feed additives are helping, but cannot replace AGP without a holistic approach in order to recover and to eventually surpass animal performance.

Improving the overall feed quality will enable to get back performance through raw material, nutrients and additives management.

Can we actually manage to produce meat without using AGP in livestock in the Vietnamese context?

Based on TECHNA Group expertise, from Europe but also locally, we conducted trials in Vietnam in order to show and to share the results of the work of TECHNA experts based of the AGP ban in the European Union from April 1997 to December 2005 — a 9-year process which led to finally produce meat without any AGP.

Those trials are made to study, monitor and constantly adapt our knowledge to the Vietnamese context, especially with the use of Reganol, our flagship additive as a cornerstone of AGP removal.
The last trial results are showing a very positive outcome in all zootechnical parameters. We apply a holistic approach in all the aspects of the production system involving raw material, veterinary products, formulation, biosecurity and management.

The seminar gathered more than 50 people and was a good occasion to exchange with Vietnamese customers and authorities with regard to the French Expertise in Animal nutrition. Propositions and recommendations gathered from professional were made by Mr Bernard Vallat, Honorary GD of OIE (World organization for Animal health) to the MARD representative.

Should you be interested by our approach to finding alternative ways to AGP use in livestock farming in Vietnam, please contact our experts!